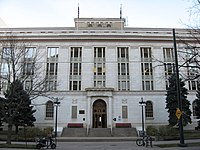 Durango, CO - The United States of America sued The Durango & Silverton Narrow Guage Railroad Company and American Heritage Railways, Inc. on damage to real property tort theories seeking to recover damages it suffered as a result of the “416 Fire,” which started on the morning of June 1, 2018, near Durango, Colorado. The United States incurred approximately $25 million in suppression costs and other damages, including rehabilitation costs, which are still to be fully determined.

The 416 Fire burned approximately 54,000 acres, mostly on lands in the San Juan National Forest, and required significant deployment of federal firefighting resources. Five incident management teams (IMTs) were assigned to the fire during the course of the incident. All the IMTs assigned met the objective of keeping the fire west of Highway 550 and north of a large subdivision. The fire burned actively for approximately 61 days and was not declared completely extinguished until November 29, 2018.

The United States asserts that because the fire was caused by the Durango & Silverton Narrow Gauge Railroad Company and American Heritage Railways, Inc., they should be held liable under federal and Colorado law for all the damages incurred by the United States as a result of the fire, including the costs of fire suppression and the costs to rehabilitate the public lands damaged by the fire.

“Protecting our public lands is one of the most important things we do in the U.S. Attorney’s Office,” said U.S. Attorney Jason Dunn. “This fire caused significant damage, cost taxpayers millions of dollars, and put lives at risk. We owe it to taxpayers to bring this action on their behalf.”

“As with all fire investigations, the 416 Fire investigation was handled with great care and thoroughness. We appreciate the communities’ patience through this process,” said San Juan National Forest Supervisor Kara Chadwick. “We will continue to work toward preventing similar fires from happening by reminding local businesses and the public about their role in protecting nature, and using every available tool to improve forest conditions.”

This matter was investigated by the U.S. Forest Service.