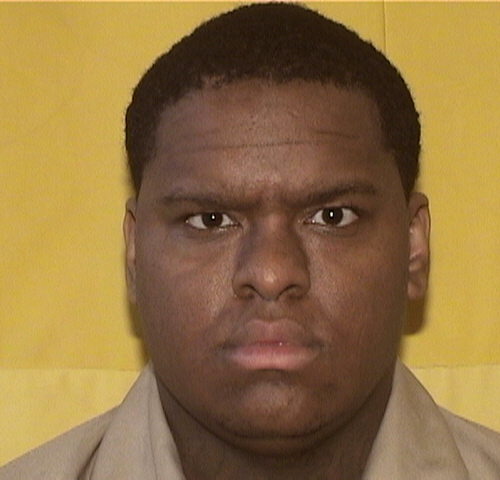 
imposed a sentence duly authorized by law, and it was jointly recommended, it was
not subject to review.
Thereafter, the trial court reviewed the charges, the potential
penalties, and the plea agreement with Hill. The trial court explained that he would
impose the recommended sentence of 18, 19, or 20 years and that Hill would be
subject to a mandatory five-year period of postrelease control. Hill then proceeded
to plead guilty as outlined in the agreement.
In June 2018, Hill appeared for sentencing. The trial court indicated
that the victim of the aggravated robbery in Case No. CR-17-613232 had requested
restitution in the amount of $7,714. Defense counsel objected to the requested
amount. The trial court proceeded to review the itemized list provided by the
probation department, which included a jacket valued at $220, a jogging suit valued
at $125, a pair of boots valued at $190, a Cleveland Cavaliers NBA Championship
ring valued at $4,999, lost contacts valued at $180, bandages valued at $45, and
$1,800 in damage to the victim’s vehicle.
Defense counsel agreed with the values pertaining to the jacket, the
jogging suit, and the pair of boots, but disagreed with the value of the Cleveland
Cavaliers NBA Championship ring. Defense counsel indicated that he had been
provided no information regarding the damage to the victim’s vehicle, the lost
contacts and the bandages.
The state presented the testimony of Benita Ramsey (“Ramsey”), the
great aunt of the victim in Case No. CR-17-620544. Ramsey testified that she had


incurred approximately $14,000 in funeral expenses and that she could furnish the
receipts. Ramsey testified that the cost incurred posed a hardship and she would
accept whatever amount the trial court thought was fair.
Defense counsel renewed its objection and opined that Hill would not
be in a position to pay the restitution after serving 18 to 20 years in prison. Despite
his objection, defense counsel asked the trial court to proceed with sentencing. The
trial court, however, continued the hearing to give the parties time to furnish
additional documentary evidence of economic loss.
Approximately one week later, the trial court reconvened the hearing
and revisited the issue of restitution. The state presented additional documentation
to support the request for restitution in Case Nos. CR-17-613232 and CR-17-620544.
Defense counsel presented a listing of Cavaliers Championship replica rings for sale
on eBay that ranged in price from $9 to $70.
Thereafter, in Case No. CR-17-613232, the trial court sentenced Hill
to six years in prison, fined him $10,000, and ordered restitution in the amount of
$1,915. In Case No. CR-17-613191, the trial court sentenced Hill to one year, which
would be served concurrently to the sentence in Case No. CR-17-613232. In Case
No. CR-17-620544, the trial court sentenced Hill to 11 years, plus 3 years for the
firearm specification for the charge of involuntary manslaughter, for a total of 14
years. The trial court sentence Hill to three years for HWWUD to be served
concurrently with the sentence imposed for involuntary manslaughter. The trial
court ordered restitution in the amount of $12,759. The sentences imposed in CR


17-613232 and CR-17-620544 were to be served consecutively for an aggregate
prison sentence of 20 years.
Hill now appeals, assigning the following two errors for review:
Assignment of Error One
The trial court erred in imposing restitution when the plea agreement specifically did not contemplate restitution and where the trial court’s plea colloquy never mentioned restitution.
Assignment of Error Two
The trial court erred in imposing a fine of $10,000 in CR-613232 in light of [Hill’s] indigence and the large term of imprisonment imposed.
In the first assignment of error, Hill argues the trial court erred by
imposing restitution because it was not part of his plea agreement with the state.
We review a trial court’s decision to order restitution for abuse of
discretion. State v. Maurer, 2016-Ohio-1380, 63 N.E.3d 534, ¶ 12 (8th Dist.); State
v. McLaurin, 8th Dist. Cuyahoga No. 103068, 2016-Ohio-933, ¶ 8. An abuse of
discretion implies that the trial court’s attitude is unreasonable, arbitrary or
unconscionable. Blakemore v. Blakemore, 5 Ohio St.3d 217, 219, 450 N.E.2d 1140
(1983).
In the instant case, following Hill’s change of plea and after the trial
court had continued the sentencing hearing, for one week, to give the parties the
opportunity to further discuss the issue of restitution, the following exchange took
place:
[THE COURT]: Are you suggesting that the Court is without jurisdiction or unable to impose any financial sanctions including restitution because it wasn’t mentioned in the plea?


[DEFENSE COUNSEL]: As far as jurisdiction goes, I mean, obviously, the Court has jurisdiction. My argument is —
[THE COURT]: As far as 2929.18.
[DEFENSE COUNSEL]: I know 2929.18. I think it applies. Here’s my point, I think that that was not part of the bargain that the State made. And that if they intended on asking for restitution, a lot of restitution, that should have been made part of the plea bargain on the record. And I think the plea bargain is fair. I think what he plead to and what he did. I think the range is fair. That’s why we plead to it, and we just, I would ask that the Court just stick to that and not impose restitution.
[STATE]: The plea bargain as outlined was the plea bargain. It spoke to penalties in terms of incarceration and acceptance of responsibility for the homicide. It’s silent on the issue of fines, costs, or restitution. To argue since it’s silent that the Court is deprived of its inherent jurisdiction to impose those remedies or penalties I think is not part of the law’s plea bargain or contract. I think the Court does retain inherent authority to order a financial either restitution or fines or costs.
Pursuant to R.C. 2929.18(A)(1), a trial court may order an offender to
pay restitution to the victim’s family “in an amount based on the victim’s economic
loss” as part of a felony sentence.
R.C. 2929.18(A)(1) provides, in relevant part:
Except as otherwise provided in this division and in addition to imposing court costs pursuant to section 2947.23 of the Revised Code, the court imposing a sentence upon an offender for a felony may sentence the offender to any financial sanction or combination of financial sanctions authorized under this section. Financial sanctions that may be imposed pursuant to this section include, but are not limited to, the following:
(1) Restitution by the offender to the victim of the offender’s crime or any survivor of the victim, in an amount based on the victim’s economic loss. * * * If the court imposes restitution, at sentencing, the court shall determine the amount of restitution to be made by the offender. If the court imposes restitution, the court may base the amount of restitution it orders on an amount recommended by


the victim, the offender, a presentence investigation report, estimates or receipts indicating the cost of repairing or replacing property, and other information, provided that the amount the court orders as restitution shall not exceed the amount of the economic loss suffered by the victim as a direct and proximate result of the commission of the offense. If the court decides to impose restitution, the court shall hold a hearing on restitution if the offender, victim, or survivor disputes the amount.
A plain reading of the above statute vests the trial court with
jurisdiction to order restitution. With respect to the amount of restitution imposed,
the court “must engage in a ‘due process ascertainment that the amount of
restitution bears a reasonable relationship to the loss suffered.’” McLaurin, 8th
Dist. Cuyahoga No. 103068, 2016-Ohio-933, at ¶ 13, quoting State v. Borders, 12th
Dist. Clermont No. CA2004-12-101, 2005-Ohio-4339, ¶ 36. Further, the amount
must be supported by competent, credible evidence. State v. Johnson, 2018-Ohio
3670, 119 N.E.3d 914, ¶ 55 (8th Dist.), citing State v. Gears, 135 Ohio App.3d 297,
300, 733 N.E.2d 683 (6th Dist.1999).
The record indicates that the trial court held two hearings on the issue
of restitution after defense counsel objected. Between the first and second hearing,
documentary evidence was presented to aid the trial court in determining an
amount that was reasonable. Our review of the record reveals that there was
competent and credible evidence from which the trial court was able to discern the
amount of restitution to a reasonable degree of certainty. As a result, the trial court
satisfied the statutory requirements.


We also note that at the first hearing, the trial court asked defense
counsel if Hill wanted to withdraw his pleas. Defense counsel declined and indicated
he wanted to proceed with sentencing. In addition, there is nothing in the record to
suggest that defense counsel revisited the plea bargain with the state, during the
one-week period between the two hearings. There is no indication that defense
counsel lodged a complaint with the prosecutor’s office that restitution was not
contemplated or engaged in any effort to have restitution not be part of the
agreement.
Further, prior to Hill entering his pleas, the trial court stated: “The
only promise I am making is that I will impose a sentence of 18, 19, or 20 years. Do
you understand that?” Hill stated that he understood. Thus, Hill was on notice that
the trial court was not limited by the plea agreement.
Further, in State v. Lalain, 136 Ohio St.3d 248, 2013-Ohio-3093, 994
N.E.2d 423, when the Ohio Supreme Court considered whether it was error for the
trial court to order a defendant to pay an amount of restitution in the absence of it
being specified in the plea agreement. The court stated:
The certified question merges the above statutory requirements with the concept of the plea agreement and needlessly confuses the matter. The statute contains no statement about incorporating restitution into plea agreements, so that is not a statutory mandate.
Id. at ¶ 23.
Based on the foregoing, we find no abuse of discretion in the trial
court’s order of restitution in these matters.
Accordingly, the first assignment of error is overruled.


Here, we are satisfied that the trial court considered Hill’s present and
future ability to pay before imposing financial sanctions. As previously noted, the
trial court held two hearings before imposing financial sanctions. The record
indicates that Hill was 22 years old at the time he was sentenced. The trial court
encouraged Hill to make good use of his time while in prison and advised Hill that
he could do community work service to help pay down the costs and fines.
Based on the foregoing, we find no abuse of discretion in the trial
court’s imposition of a fine.
Accordingly, the second assignment of error is overruled